The Benefits of Blueberries 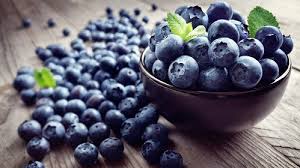 24 Jun The Benefits of Blueberries 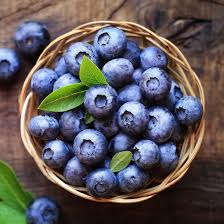 Blueberries are some of the highest nutrient-dense foods containing antioxidants. These protect the body from harmful molecules called free radicals which can damage cells within the body. Here are some major benefits of consuming blueberries: They are loaded with antioxidants such as anthocyanin, chlorogenic acid, myricetin and arbutin which are all neuroprotectors which will protect the brain and prevent or at least stave off degeneration which will also help prevent and slow the development of Alzheimer’s and dementia.

They reduce the risk of heart disease. In fact, eating one cup of blueberries a day (150g) can reduce the chance of cardiovascular disease by 15%. This actually caused sustained improvement in vascular function and arterial stiffness.

Because blueberries are high in the antioxidant anthocyanin, it helps the skin by protecting it from harmful free radicals (an unpaired electron seeks out another electron and damages the pairing to become a pair which then causes damage to cells, proteins, and DNA) which would attack and damage the skin’s collagen which keeps it firm. Blueberries are also high in vitamin C which is highly important for collagen production.

As we age, and post-menopause women, inflammatory processes within the body become more active which causes osteoclasts to break down bone and which then releases the calcium from within it into the blood. Because blueberries have phenolic compounds, they inhibit a transcription factor called NFkB, which can prevent bone formation by suppressing osteoblasts (which formulate new bone). By inhibiting and suppressing the NFkB it will allow osteoblasts to continue to form new bone and retain calcium while reducing the osteoclast activity thus resulting in strong healthy bones within your body.

Blueberries also have flavonoids which are another antioxidant that reduces damaged cells and can boost and improve your immune system. They are a great source of vitamin C which is also necessary for a strong immune system.

Here are some nutritional values of blueberries on a 1 cup (150g) serving:

So as you can see, there are many great reasons to eat blueberries.  Eat them in the morning by themselves, mix them in your oatmeal or cereal, put them in a shake, or have them with a mixed bowl of fruit.  But definitely make them a staple of your everyday diet